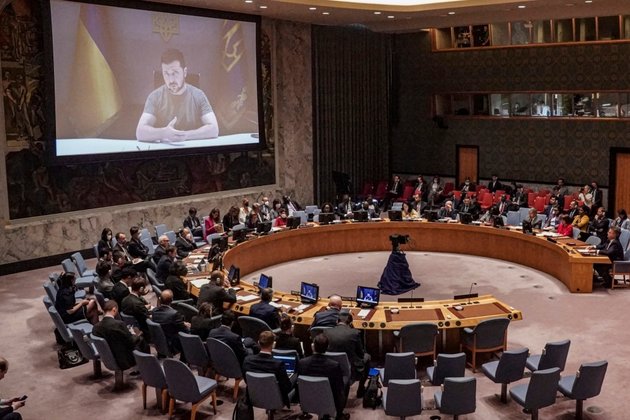 United Nations - Ukrainian President Volodymyr Zelenskyy told the U.N. Security Council Tuesday that Russia must be isolated internationally for its sham referendums in his country.

'There is only one way to stop this all,' he said by video. 'First, it is the complete isolation of Russia in response to everything it does.'

More sanctions should be imposed on Moscow, he said, and it should be deprived of its veto at the U.N. Security Council and suspended from all international institutions.

If Moscow annexes these territories, Zelenskyy said, it 'will mean that there is nothing to talk about with the president of Russia.'

Ukraine, the United States and other Western countries have denounced the referendums as illegal. International recognition is highly unlikely.

U.N. political chief Rosemary DiCarlo told council members that the referendums are not a 'genuine expression of the popular will.'

'Unilateral actions aimed to provide a veneer of legitimacy to the attempted acquisition by force by one state of another state's territory, while claiming to represent the will of the people, cannot be regarded as legal under international law,' she said.

A man casts his ballot during a referendum in Luhansk, Luhansk People's Republic controlled by Russia-backed separatists, eastern Ukraine, Sept. 27, 2022.

Russian news agency RIA Novosti reported Tuesday that with about one-fifth of the vote counted from the five days of balloting in Donetsk, Luhansk, Zaporizhzhia and Kherson, more than 97% of voters in all four regions favored annexation. Together, the regions make up about 15% of Ukraine's territory.

'Now, Kyiv is being rejected not only by the people of Crimea and Donbas, but Kherson and Zaporoizhzhia regions,' Russian Ambassador Vassily Nebenzia told council members. 'This process is going to continue if Kyiv does not recognize its mistake and its strategic errors and doesn't start to be guided by the interests of its own people, and not blindly carry out the will of those people who are playing them.'

There are concerns in Ukraine and the West that should the territories be annexed, Russian President Vladimir Putin would claim any attempt by Ukrainian military forces to recapture the land as an attack on Russia itself.

The United States and Albania have circulated a draft resolution to Security Council members condemning the referendums, calling on countries not to recognize any altered status of Ukraine and compelling Russia to withdraw its troops from the country.

'If Russia chooses to shield itself from accountability here in the council, we will then look to the U.N. General Assembly to send an unmistakable message to Moscow,' U.S. Ambassador Linda Thomas-Greenfield said. 'The world must stand together and defend the Charter of the United Nations.'

She told reporters after the meeting that she hopes to seek a vote in the Security Council either late this week or early next week.

'We call on all U.N. members - everyone for whom the principles of sovereignty, territorial integrity and the inviolability of borders have meaning - to oppose Russia's actions, condemn the referendums and their anticipated results, and never recognize any attempt to steal Ukrainian land through violence and terror,' Albanian Ambassador Ferit Hoxha said.

A group of Russians walk after crossing the border at Verkhny Lars between Georgia and Russia in Georgia, Sept. 27, 2022. After President Vladimir Putin ordered a partial mobilization to bolster his troops in Ukraine, many Russians are leaving their homes.

Last week, Putin indirectly threatened that he was willing to use nuclear weapons to defend the 'territorial integrity' of Russia - a threat widely denounced by Ukraine, the U.S. and other Western countries that have sent billions of dollars to the Kyiv government to fend off Russia's seven-month invasion.

Dmitry Medvedev, deputy chairman of Russia's Security Council and the country's former president, said Tuesday that if Russia is threatened beyond a certain limit, it has the right to respond 'without asking anyone's consent and holding long consultations.'

'Let's imagine that Russia is forced to use the most powerful weapon against the Ukrainian regime that has committed a large-scale act of aggression, which is dangerous for the very existence of our state,' Medvedev wrote on his messaging app channel. 'I believe that NATO will steer clear from direct meddling in the conflict in that case.'

U.S. Secretary of State Antony Blinken told CBS News' '60 Minutes' show on Sunday that the United States has made it clear publicly and privately to Russia to 'stop the loose talk about nuclear weapons.'

'It's very important that Moscow hear from us and know from us that the consequences would be horrific, and we've made that very clear,' Blinken said.

Meanwhile, heavy fighting continued in several areas of Ukraine, including the Donetsk region.

In Russia, widespread protests against Putin's troop call-up have erupted on the streets, with police arresting hundreds of demonstrators in Moscow and elsewhere.

Many men opposed to Putin's war or fearful of being killed on the battlefield have abruptly fled Russia on flights to other countries, while others have joined long lines of cars on land routes headed to the Russian borders with Finland, Georgia and other countries.

Some information for this story came from The Associated Press, Agence France-Presse and Reuters.