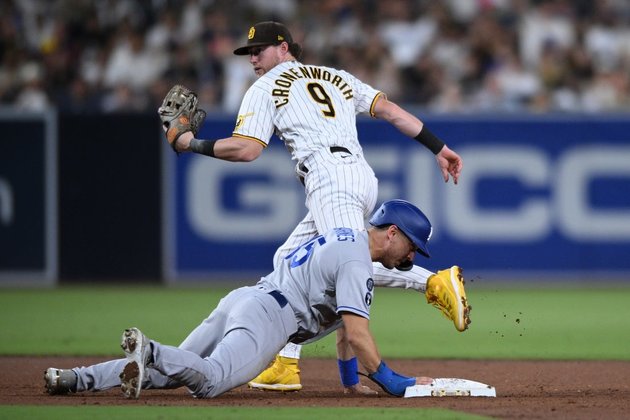 Padres walk past Dodgers in 10th

Jorge Alfaro drew a two-out, full-count, walk-off walk from Craig Kimbrel in the bottom of the 10th Tuesday night to give the San Diego Padres a 4-3 win over the visiting Los Angeles Dodgers.

Jose Azocar started the 10th as the ghost runner and was bunted to third by Ha-Seong Kim. After Kimbrel intentionally walked Juan Soto, he struck out Manny Machado. But he then walked Brandon Drury to load the bases before walking Alfaro to force in the winning run.

It was the fifth time this season that Alfaro had a walk-off plate appearance. It was the Padres' 12th walk-off win of the season and improved their extra-inning record to 12-4. The Dodgers (106-48) are 5-9 in extra innings.

Pierce Johnson (1-1) got the win. Kimbrel (6-7) took the loss. The Padres (86-68) gained a game on both the Philadelphia Phillies and Milwaukee Brewers in the wild-card race.

Dodgers starter Tyler Anderson retired the last 16 Padres he faced after giving up two runs on three hits in the first.

Soto got the Padres started with a one-out single, but he was forced out at second on Machado's groundout to third. Drury followed with a double. After falling behind on two strikes from Anderson, Wil Myers lined a two-out single to center, putting the Padres ahead 2-0.

Anderson gave up the two runs on three hits with three strikeouts over six innings.

Padres starter Blake Snell held the Dodgers scoreless on one hit (a game-opening single by Mookie Betts) and three walks with six strikeouts over five innings. But he was forced to leave early as the Dodgers forced him to throw 96 pitches in five innings.

The Dodgers tied the game against Padres reliever Nick Martinez as soon as Snell departed.

Trea Turner greeted Martinez with a single and Freddie Freeman drew a walk. After Will Smith flew out, Justin Turner drew a walk to load the bases.

Max Muncy then grounded into what appeared to be an inning-ending double play. But the Dodgers appealed the call at first and Muncy was ruled safe, with Trea Turner scoring. Chris Taylor followed with a game-tying single to center.

Miscues led to the third run for each team.

The Padres took a 3-2 lead in the bottom of the eighth when pinch-runner Trent Grisham scored from third after Dodgers third baseman Justin Turner bobbled Drury's two-out, bases-loaded grounder. Austin Nola led off the inning with a double that hit off left fielder Chris Taylor's glove.

The Dodgers tied at 3-3 in the ninth. Trea Turner doubled off Josh Hader to open an inning prolonged by an error by shortstop Kim. Turner then scored on a two-out passed ball by Alfaro.